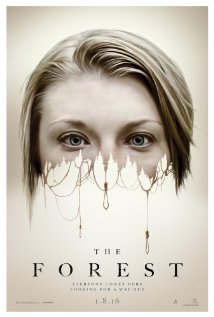 The beginning of January usually sees new low budget films make number one at the box-office. Universal’s little horror flick , THE FOREST aims to do just that, and hopefully keep their fantastic 2015 year of box-office hits carried over to 2016.

Twins have always been a favourite pick in the horror genre. Films like Brian De Palma’s SISTERS, David Cronenberg’s DEAD RINGERS and others like THE OTHER and last year’s German GOODNIGHT MOMMY are prime examples. THE FOREST combines the twins story to a haunted forest plot in a relatively scary film about a young woman Sara (Natalie Dormer) who travels to Japan’s forest below Mount Fuji to search for her missing twin, Jesse (also played by Dormer but with black hair).

For a ghost story, there is little gore except a stabbing and a few imagined maggots. Director Zada is fond of false alarms to scare the audience out of the seats. These include a homeless man suddenly banging Sara’s taxi window in Japan, her dream of little Jesse in the tent screeching at her and scares from a Japanese teenager in school uniform among others.

At its best, the film has genuine cinematic scares. The dark of a forest is already creepy in itself. THE BLAIR WITCH PRJECT was scary enough with its camping segment shot mainly in the dark. Zada utilizes the segment in which Sara sits in the tent in the forest to stay the night waiting for her sister to return, to maximum effect. The use of light and shadows from the burning fire adds to the creepiness. Sara’s fall into a huge hole and exploring an underground cave also adds to the film’s best moments.

Story-wise, the plot is simple enough. It is a sister’s search for her twin in a Japanese forest known as a place where people go to die. A few loose ends could be easily explained. One immediate point that is questionable is character Rob (Eoin Macken), who meets Sara. He is supposed to be an Australian journalist in Japan. But he speaks with an American accent. But from the dialogue that specifies Rob as a traveller, it could be assumed that Rob is American with an Australian posting. One scene has the Japanese guide tell Sara that in the forest bad things can happen, but they are not real and are all in the head. This is an excuse for other non-explanations in the plot such as Jesse’s photos on Rob’s cellphone or Rob’s answer to Sara that Jesse has been dead for 5 days. These could be dismissed as imaginations in Sara’s head.
Still, this relatively slow moving horror movie is well scripted by no less than 3 writers. Zada’s direction is apt enough and there are sufficient scares – false alarms or real ones.

Do not expect scenic shots of Mt. Fuji or its forests below. The film was actually shot in a National Park in Serbia with an entire crew of Serbians, as can be seen in the end credits. But the cinematography is excellent for a horror flick and the Serbian National Park looks like quite the place to visit.

THE FOREST will definitely make one think twice when camping at night.