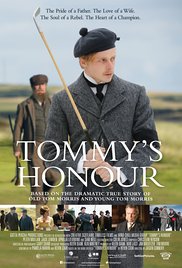 In every generation, a torch passes from father to son. And that timeless dynamic is the beating heart of Tommy’s Honour – an intimate, powerfully moving tale of the real-life founders of the modern game of golf.

Where did golf originate? Not too many people know that the game originated from Scotland. TOMMY’S HONOUR celebrates both Scotland and golf, a film that is an eye-opener on golf as seen from the eyes of Tommy, a champion golfer with the humble beginnings of a
greens-keeper’s son/caddy.

TOMMY’S HONOUR is a 2016 historical drama, a proudly Scottish film depicting the lives and careers of, and the complex relationship between, the pioneering Scottish golfing champions Old Tom Morris and his son Young Tom Morris. The screenplay, written by Pamela Marin and Kevin Cook, is based on Cook’s 2007 book, Tommy’s Honour: The Story of Old Tom Morris and Young Tom Morris, Golf’s Founding Father and Son It is a well known book in golfing circles as it won the Herbert Warren Wind Book Award as the best golf book of 2007’ It was also one of the five books that Sports Illustrated selected as the “Books of the Year” in 2007. One can expect high hope for the film adaptation.

The period piece is set in St Andrews, Scotland in 1866. Tommy Morris (Jack Lowden) is presented as an avid golfer like his legendary and pioneering father, Tom Morris (veteran actor/director Peter Mullan). “Old Tom” is greens-keeper for The Royal and Ancient Golf Club of St Andrews, as well as the town’s club- and ball-maker. He is the two-time winner of the first major golf tournament, The Open Championship, which he founded in 1860. He also established golf’s standard of 18 holes per round. But Tommy is beginning to chafe at his father’s dictates, especially in the rapidly changing world they live in.

Father and son repeatedly clash over the unwritten rules of social class, and this culminates when Tommy marries his sweetheart Meg (Ophelia Lovibond), a woman of lower standing with a shameful secret in her past. But there is more in the story with a big father and son relationship makeup.

The film includes a few competitive golf tournaments. But TOMMY’S HONOUR is not specifically a sports film. It also serves as a biography of the Morris’s. The golf tournaments are well shot to capture the excitement of the game. The beauty of the Scottish landscape is also celebrated.

With Pamela Marin co-writing the script, the film contains a strong feminine perspective, despite golf being mostly a male sport. Meg who is shunned by the church for having a bastard child in the past is offered a second chance for happiness in the film. One of the film’s highlights is the mother/wife confrontation. Tommy’s resistance to the class structure is rendered more sympathetic with his true love for Meg.
The film has a good pace that builds dramatically towards its climax.