After their new Jeep conks out on a desolate stretch of Arizona highway, a well-heeled Massachusetts couple accepts the help of a kindly, honest-seeming trucker, who drives the wife to a diner while the husband stays behind to “protect” the vehicle. After saying goodbye, the husband gets two surprises: the Jeep starts, and his wife never actually arrived at the diner, and the trucker doesn’t recollect having picked her up at all…

An exciting and compelling thriller that star Kurt Russell as a husband desperately trying to find his wife who may or may not have been kidnapped by some desert locals. What’s great about this film in particular is the suspense which in many films try to capture it, only to come up with nothing. But here Mostow and Russell work well in conveying husband’s anguish and the looming tension.

Jeff and Amy Taylor are moving to California and must drive across the country. While driving the jeep starts to breakdown, or at least appears so. When they find themselves stranded in the middle of a desert with hardly anyone or anything around, their trip comes to a sudden halt.

When a truck driver pulls up he offers the two a ride to the nearest diner, 60 miles away. Jeff however wants to remain with the jeep, believing that the jeep might have just overheated, which is what the trucker suggested. But Amy reasons that if it’s not overheated they may be stranded for a lot longer.

So, they agree for her to take a ride with the trucker to the diner where she can call for a tow truck. She leaves. But after a long time with no tow truck, Jeff becomes worried.

The jeep starts working again, and he heads off to the diner where he finds that no one in the diner has seen or heard from his wife. When he finds the trucker who gave Amy the ride, the trucker swears he has never seen her. Now Jeff must attempt to find his wife, who has been kidnapped and is being held for ransom.

There are a few twists that pop up throughout the film which actually adds depth to certain characters. JT plays the villain but there’s more to his story than simply a one note bad guy. He has a family, and a son who admires him greatly.

Kurt Russell has always been solid actor and many of his roles, and here he’s no different. It’s nice to see him again since nowadays he’s rarely seen in films. But here he shows us why he was such valuable commodity in the business. Maybe he’ll show up some more in future movies. 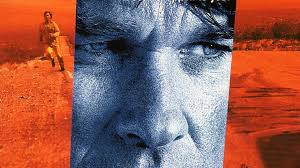