Two iconic Japanese ghosts are thrown into the ring for a grudge match that’s the ultimate spectral showdown.

A more appropriate title would be THE RING VS THE GRUDGE. University students Yuri (Mizuki Yamamoto) and Natsumi (Aimi Satsukawa) buy an old VCR in order to transfer their home videos to DVD, but when Natsumi watches the dusty old tape found in the machine, she realizes she may have fallen victim to the curse that their urban-legends professor Morishige (Masahiro Komoto) is obsessed with.

Meanwhile, high-schooler Suzuka (Tina Tamashiro) is having dreams about a mysterious house down the street from her new home. Though warned not to enter the house lest she be killed by the Saeki family curse, she is soon drawn inside by the resident ghosts, Kayako and her son, Toshio.

The film is SADAKO VS KAYAKO. But the film does not turn out as well as it sounds. I am not a fan of mash-ups like BATMAN VS. SUPERMAN or COWBOYS VS ALIENS. They turn out too silly and never achieve much, the only exception being the excellent Japanese classic KING KONG VS GODZILLA.

Sadako exists mainly as hair coming out of the TV or video tape so a confrontation of hair against a white crawly ghoul might not amount to much.

Director Shiraishi spends too much time setting the stage for the fight and when it finally occurs, it is a disappointment.

See this only if you must! 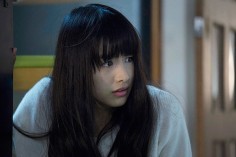 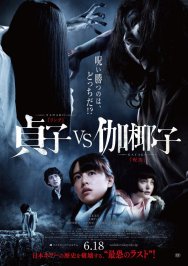