After losing his family and then his job to alcoholism, Ben decides to pack up his life, head to Las Vegas, and drink himself to death. Sera, a worn and wasted prostitute crosses paths with Ben in Las Vegas. They find solitude in one another and soon enough an unconventional relationship starts to bloom.

“Leaving Las Vegas” is based on a semi-autobiographical novel written by John O’Brian. John O’Brian was an alcoholic with the end in sight, just like his character, Ben. His fate arrived sooner than expected. O’Brian took his own life just two weeks after he found out his novel was going to be adapted into a film. O’Brian’s father believes that “Leaving Las Vegas” was his son’s suicide note. Mike Figgis adapted the novel into a screenplay and managed to maintain the dark undertones that the novel entails. Figgis succeeded in bringing this beautiful but extremely solemn tale onto the big screen. Figgis also composed the music for the soundtrack. What he put together was a rather haunting but delicately emotional sound.

Ben (Cage) works in the film industry in Los Angeles. It is a pivotal time in Ben’s life. His alcoholism has past the point of no return and his life is hastily withering away. His wife and son have left him and now, after tolerating his erratic behaviour for a while, Ben’s workplace finally let him go too. Ben packs up his life in LA, obliterates everything that is personal to him and heads to Las Vegas where he shall drink to his death. Once in Vegas, Ben stumbles upon an angel, Sera.

Sera (Shue) is a prostitute working on the streets of Las Vegas. She moved to Las Vegas with Yuri (Sands) her pimp/boyfriend and since has endured a life of using her body to make money. Sera has been in this business a long time and has experienced all the horrors she can imagine. Her body no longer seems a part of her rather a mere tool to make money. Yuri is in control of this tool, using it for his own personal needs as well as a form of income. Sera’s long lost a sense of herself but when she meets Ben things start to change for the better. In the meantime Yuri is in trouble with the Romanian mafia – it’s so far gone that a group of thugs have been sent to deal with the situation. Yuri is aware of his fate, he cuts strings with Sera and lets her go free.

Ben almost runs Sera over at a stop light and being the tough girl she is, Sera struts to the car and gives Ben a piece of her mind. This is Ben and Sera’s first encounter. Ben later finds Sera on the street. Ben’s aware that Sera’s a prostitute, he offers her money to come back to his motel. Sera is prepared for yet another with a “client” but to her surprise it turns out to be the first bearable night that she has had in a long time. Sera encounters something that she’s never encountered before. Ben simply wants her to keep him company, not for sex but just to talk. Sera realises how lonely she’s is and has been for a long time. Ben is the void that Sera’s been missing for so long. With Yuri out of the picture Sara asks Ben to move in with her. Ben is hesitant but agrees on one condition – Sera must never ask Ben to stop drinking. This promise seems easy at first but as soon as Ben’s alcoholic world becomes real to Sera and as soon as Sera’s falls for him, this promise to allow him to kill himself, well the promise is broken almost as quick as it was made.

This is he last time I’ve seen Nicholas Cage play a great role. I think he’s talented but unfortunately there hasn’t been much proof of that since “Leaving Las Vegas”. Cage’s choice in roles, up until now have been terrible, bad films which have resulted in some very poor performances. When I think of the great films he’s been in like “Moonstruck” or “Raising Arizona” I get sad because I honestly miss what he was and perhaps what he won’t ever be again. He may find himself turning another corner soon, I hope, I really do. Cage won an Oscar for his performance in “Leaving Las Vegas” and it was well deserved. Elisabeth Shue played the role of Sera so well, she was also nominated for an Oscar but regretfully she didn’t win like her co-star. Before this film Shue was only really known as Tom Cruise’s love interest in “Cocktail”. She managed to turn a lot heads in “Leaving Las Vegas” but unfortunately after this role she fizzled away, which I also think is a shame. Perhaps she too will find another role that fits her just like a glove. “Leaving Las Vegas” wasn’t only a success with its two lead actors it received a generous amount of nominations for best director, screenplay, and film as well. This is not a classic love story with a happy ending. It’s a love story that ends as quickly as it begins but what it does is it leaves you with a compellingly emotional state of mind. It’s such a great piece of work. 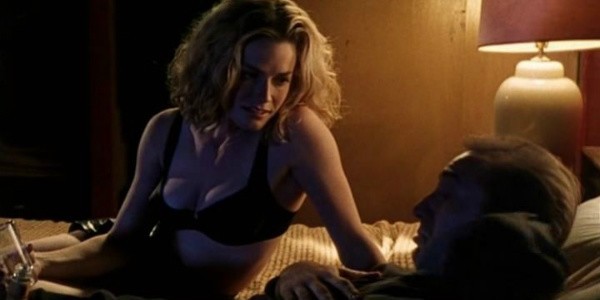