Women are left behind to work a family farm during the Great War.

(Spoiler Alert: Last paragraph in bold italics.  Skip this last paragraph though reading it will not spoil the film’s impact.)

Director Xavier Beauvois (director of DES HOMMES ET DES DIEUX, 2010 last seen as an actor playing Vincent in Clare Denis’ LET THE SUNSHINE IN) returns with a World War 1 historical drama about women looking after the farms when the men are send out to fight during the great war.  It stars Nathalie Baye in a dramatic but controlled performance as Hortense, a strong willed woman and matriarch of the Pardier family who manages the family farm.   The film is based on the novel by Ernest Pérochon and written by Xavier Beauvois, Marie-Julie Maille and Frédérique Moreau.

Beauvois’ film like his previous film moves at a leisurely pace with an authentic period atmosphere of rural France.  The film plays out like the waiting of the war to end.  The farm chores like ploughing the land, harvesting the crops, milking and driving the cows help in the creation of rural farm life.

The story is told from the points of view of both Hortense and Francine (Iris Bry), the new female farmhand (known eventually as the best farmhand in the region) that Hortense hires to help in the harvest who she eventually keeps on.

The film is a handsomely mounted period piece of World War I told during the period from 1916 the war’s start to 1919 the year after it ended.   It is a story that needs ti be told – of

the devastation of war as examined from many angles

the absence of men

– the change of characters of the fighting men when they return from war (I do not recognize him: says one of the women of hr husband)

as well as modernization had on a typical farm family in France.

Beauvois use of close ups and editing especially the switching of the camera shots of the different faces (Hortense, Georges, the Americans, Francine) is masterfully demonstrated in the film’s best segment after harvesting.

The film is also quick to point out that there are equal casualties on both sides.  Clovis (Olivier Rabourdin) returning from furlough to the farm points out that Germans are like the French at war – ordinary men.  One nightmare segment has Georges screaming in the middle of the night when he dreams of killing an enemy with a knife, only to pull of the dead man’s h]gas mask to find himself looking at his own image.

LES GARDIENNES proves (like CASABLANCA and LES PARAPLUIES DE CHERBOURG) that not living happily ever after with ones true love can also make an unforgettable love story.

Women are left behind to work a family farm during the Great War.

LES GUARDIENNES (THE GUARDIANS) is director Xavier Beauvois’ (LE PETIT LIEUTENANT) handsomely mounted period piece of World War II told during the period of 4 years from 1916, the start to end.

It is a story that needs to be told – of what effects the war as well as modernization had on a typical farm family in France.

The women of the Pardier farm, under the deft hand of the family’s matriarch (Nathalie Baye in arguably her best role), must grapple with the workload while the men, including two sons, are off at the front. Her husband, daughter and , grand-daughter remain with her. She seeks the aid of an outsider, a strong 25-year old orphan, Francine (Laura Smet) who turns out to be an excellent worker.

When Francine and on of the sons fall in love, the trouble starts. Beauvois’ film is almost perfect in he creation of the war atmosphere and of rural France. The harvesting and planting seasons are beautifully captured on film.

The film also does not gear towards the typical Hollywood ending but a realistic credible one instead. 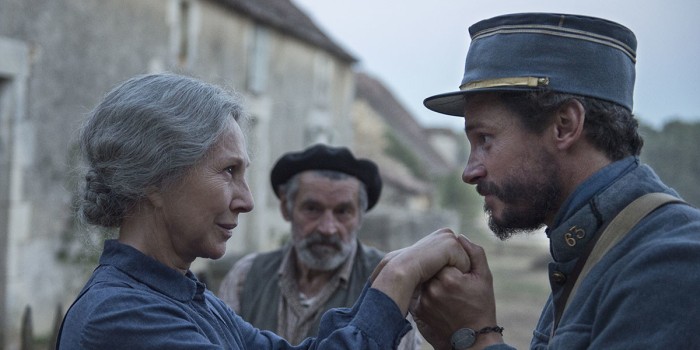