It has been two years since the tragic events at Woodsboro. Sidney Prescott and Randy Meeks are trying to get on with their lives, and are currently both students at Windsor College. Cotton Weary is out of prison, and is trying to cash in on his unfortunate incarceration. Gale Weathers has written a bestseller, “The Woodsboro Murders,” which has been turned into the film, “Stab,” starring Tori Spelling as Sidney. As the film’s play date approaches, the cycle of death begins anew. Dewey Riley immediately flies out of Woodsboro to try to protect Sidney, his “surrogate sister.” But in this sequel to the 1996 horror film, the number of suspects only goes down as the body count slowly goes up!

TRIVIA: Scream 2 actually beat Titanic at the weekend box office when it opened in December 1997. Titanic then went on to go #1 at the box office everyday for straight 5 months and eventually became the biggest grossing film of all-time. But, Scream 2 can say that it topped it when it went head to head.

Going back and watching this Scream sequel really got me very nostalgic. I remember sitting in the theater with my friends and really giving live play by play commentary of the film while it was happening. This is just one of those films. Of course now I hate it when others do this at it happened to me during a screening of My Bloody Valentine as people were talking so much, I couldn’t pay attention to the movie. But when you’re in your early 20s, you tend to be a little selfish. So I apologize to all the people who were sitting around us during the screening. We were jerks.

Scream 2 is one of those films that is probably more suited for a home viewing than watching it in the theater. It’s a campy film and you really can’t take it all that seriously. That said, the storytelling and characters are done well so you are definitely into the ‘what’s going to happen next’ feeling. You are definitely emotionally involved while you also get many of the wink-wink jokes during the climatic moments. The original Superman films are like this too. One moment of action leads to another moment campy comedy. Someone getting killed leads to people sitting around and chatting about horror films and their cliches. This is a film that is many things to many people. It’s a horror, a thriller, a crime movie, a mystery and most definitely a comedy. A hard thing to pull off but director Wes Craven really found the original tone that was in the script and put it on screen. Him and writer Kevin Williamson created a new movie recipe and they succeeded all the way to the bank.

When watching this film I was also surprised of all the actors who are household names or actors I respect that I completely forgot was in the film. Jada Pinkett Smith and Omar Epps play the two characters that ‘open’ the film like Drew Barrymore did in the first film. They play up how Horror films are a white man’s genre and you never see black people in the movie. As soon as you see then on screen, you know they are doomed. Craven and Williamson were pointing out to the world that they are not prejustice and even blacks can get killed in the movies. And they aren’t the killers.

Heather Graham, Luke Wilson and Tori Spelling play the ‘movie’ versions of the characters in Scream. A great campy plot as we jump into a film within a film. Luke Wilson especially was hilarious to see as at the time he was just an actor starting out and had only one credit on his resume.

Sarah Michelle Gellar, who was just getting going in her Buffy TV show, appears as well in a great ‘stab’ scene. So does pre-Dawson Creek’s Joshua Jackson who was also just starting out in the biz. Portia de Rossi and Rebecca Gayheart play the sexy sorority sisters. Jerry O’Connell plays Sidney’s boyfriend (who has an extremely awkward Top Gunish music scene in the school cafeteria) who could be the killer. And Liev Schreiber, who really only had a cameo role in the first Scream film, plays the obnoxious but charming Cotton Weary. You can tell in this role that Schreiber had something unique as he could change from sexy to scary in one emotional beat. And was an actor who definitely had a big future ahead of him.

And then there’s Timothy Olyphant. An actor I had no idea was in the film. I loved Olyphant in his role in the HBO series Deadwood. When he’s not donning a mustache, he’s a very creepy looking character. And because of that he sort of tips the hat of the film’s conclusion. Or perhaps not because he seems to be the obvious killer.

Of course this again is Sidney’s (Neve Campbell), Dewey’s (David Arquette) and Gale’s (Courteney Cox) film. Sidney is you classic main character. Strong, determined, vulnerable and haunted by past events. Arquette and Cox have fantastic on-screen chemistry (and off-screen too as they are married) and seeing that in the first film, the creators I’m sure made sure they had a lot of screen time together in the 2nd film. They are almost like a comedy team with a little romance mixed in. The geek and the princess.

Courteney Cox’s roles in these films should be pointed out as she is remarkable. If her performance doesn’t work, then the film doesn’t. We have to view Gale as a bitch with an agenda but also like her a great deal too. Her character too in Scream 2 also has the biggest emotional arcs happening. She’s the one who’s changing the most from the beginning to end.

Campbell’s role could be categorized as almost boring as it’s hard to find a storyline for her that wasn’t done in the first film. She delivers an almost thankless performance because she has after all the only ‘non sexy’ role in the film. She’s sexy but the role she plays is the role of the straightman. She must act in a thriller genre to keep the overall tone of the movie intact while all the other roles get to play it up and be campy. Sidney is the straw the stirs the drink of the movie and these type of roles can get forgotten. But if you don’t have it played well, then you don’t have a film. 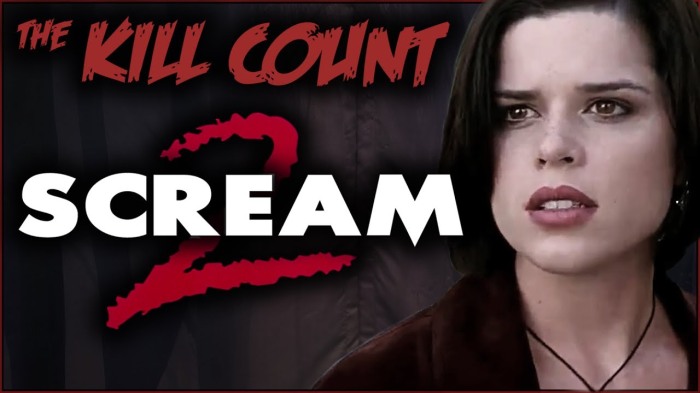 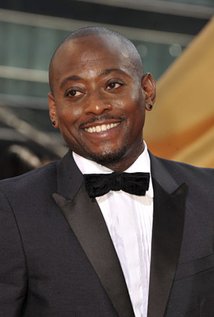