Can Asghar Farhadi ever make a bad movie? His first UNE SEPARATION won the Oscar for Best Foreign film and his latest THE SALESMAN won the Best Screenplay and Best Actor prizes at Cannes this year.

The title comes from the Arthur Miller play DEATH OF A SALESMAN that the protagonist, a high-school teacher is putting up. His wife has just been assaulted in the shower by a stranger and the husband wants revenge. Obviously there is a parallel between the characters in the Miller play and the film.

Director Farhadi always injects a dose of suspense in his films, Hitchcock style no matter what the premise of the film is. Like a Hitchcock film, the climax reveals all, and is unexpected. But the prize performance belongs to Babak Karimi who plays the assaulter.

Lots of detective work done by the husband to discover the assaulter which should delight Hitchcock fans. But the film contains a few too many unrelated incidents that could have been left out- like the evacuation of the building at the film’s start.
Trailer: https://www.youtube.com/watch?v=_VcfinMasfw 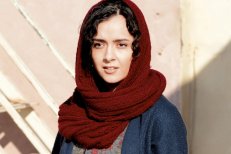