A man refuses to conform to life in a rural prison and becomes a legend among the prisoners while a nuisance to the authority officials.

One of the coolest characters ever in cinema history, Lucas Jackson (Newman) later dubbed Cool Hand Luke, refuses to bow to those who intend to restrain him from being free, or living his life the way he chooses. The 60’s were a time when adolescents challenged conformity, unwilling to submit to the corrupt oppressive adult world. Cool Hand Luke epitomized that notion of the rebellious youth.

After getting arrested, Luke in thrown in prison for two years where he has trouble adapting to the pecking order of the prisoners or even the rules established by officials. He gets into a scuffle with the head prisoner Dragline (Kennedy) and despite getting beaten severely; he continues to stand his ground, unwilling to submit. Impressed, Dragline and the rest of the inmates develop a mutual respect for the veteran war hero, and his new nickname Cool Hand Luke is donned after he wins a card game on a bluff.

Luke is charismatic, charming, and an opportunist. He looks at every moment as an opportunity to escape and he capitalizes on it, and his determination inspires others to follow. Dragline becomes a dependable and loyal ally, working with Luke in getting out of prison, despite his numerous failed attempts.

There’s a great scene that has been parodied in pop culture since the film; the boiled egg contest. Luke tries to inspire his inmates by performing a bet that requires him to eat 50 eggs in one hour, and he does. It’s a classic moment that has left a mark in pop culture.

In 2005, the film was included in the United States National Film Registry considered to be culturally, historically, or aesthetically significant. Luke is similar other characters refusing to conform. Randle McMurphy from One Flew Over the Cuckoo’s Nest and Number Six from The Prisoner, each one a representation of individuality. These are iconic characters with Luke now included in the litter.

While the prisoner guards came off a little too cartoony in which they were all one dimensional, director Rosenberg creates a terrific story with distinct characters that are fun to watch. Cool Hand Luke has become a popular film for its message and remarkable protagonist who inspires people to be free and independent. Luke reminds us that it’s cool to be different. 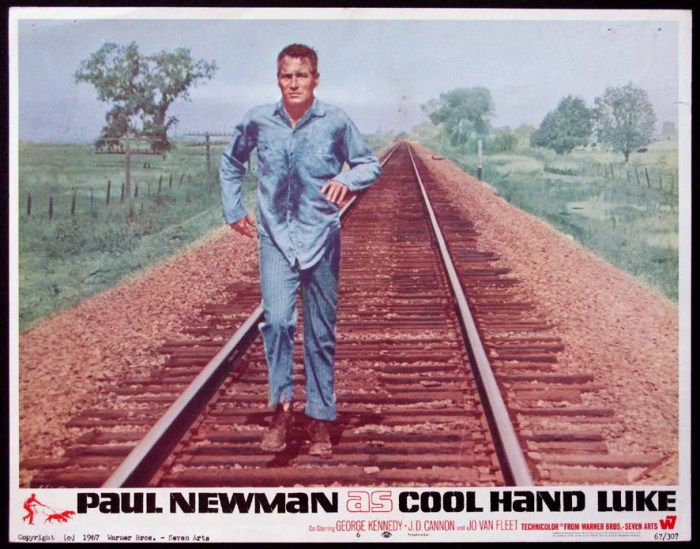