Rick, Morty, and Summer travel to a post-apocalyptic dimension and meet some dangerous enemies.

After the April Fools surprise of the first episode of the season being leaked early, Rick and Morty is finally back and on a clear release schedule. Tonight’s episode has Morty and Summer trying to cope with their parent’s divorce by escaping into a Mad Max-type post-apocalyptic desert world to try and work through their emotional issues. Morty deals with his unresolved anger at his father through his mutant arm in a refreshing take on the “enchanted armor overpowering its user” trope. On the other hand, Summer unsuccessfully dives headfirst into a relationship to try and fill the void in her life caused by her family breaking apart.

It’s interesting how Summer is taking such an active role in her adventures with Rick while Morty has historically been hesitant to participate. As much as this episode made it seem like Morty and Summer are over their parent’s divorce after their return from the Apocalypse world, it does seem like this particular emotional thread is going to continue throughout the rest of the series.

A lot of time has been spent establishing that Jerry and Beth’s relationship was toxic and codependent, so it feels like a step in the right direction for them to get divorced. However, their separate lives that were showcased in the first Intergalactic TV episode seem to imply that despite their issues, Beth and Jerry are better off together. We’ll have to wait and see how this dynamic plays out in future episodes. 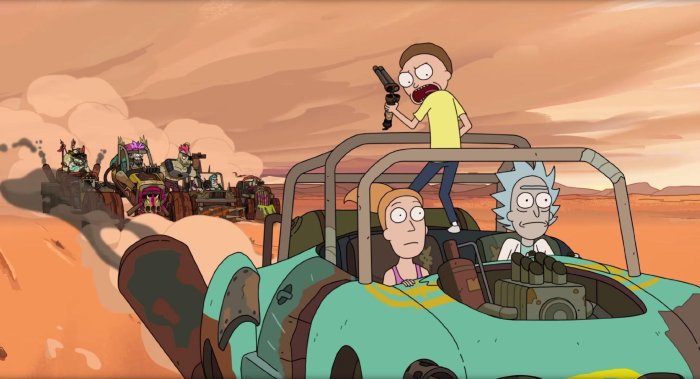 Their are evolutionary stories happened on ordinary street. The sight from the bottom can only see a huge foot wearing somethings nice , stepping on the poor for fun , giving leftover for handouts occasionally.

Quick, symbolic and filled with stunning visual metaphor, Wall is a piece about social power and economy, although at first glance it gives the cheery tone of a Pixar short. Rats and mice litter the inner city streets-scurrying about as best as a bottom feeder can and praying to the Big cheese above them for the crumbs that filter down.

And against the colorful crowd of feet walking past and a sweeping orchestra of music, one Rat attempts to climb the steep steps to a better future. But is whatever lives above him willing to open its’ doors?

Wall is a funny little film. It’s metaphors are not immediately obvious. Unless you are critically looking at it, this film appears to be a simply physical-schtick comic piece, full of patchwork scurrying mice, a slick fast thinking Rat and a ominous and unknowable villain towering above them.

But if you give it thought, it becomes a deeply layered piece about our society, economy and our difficulty in climbing the corporate ladder, when even its bottom rungs are high above you.

Played at the December 2016 Best of Family/Animation FEEDBACK Film Festival.

A-SIE,the crab, was watching TV with his friend, the fish. Suddenly, Cook came and took the fish.To save his friend, A-SIE left his comfort zone and fight with Cook!

Directed by Light Fish Chen, is a film that ties in action, zany larger-than-life characters and comedy together through the adventures of- you guessed it, a Crab with an unusual haircut. All seems well for our hero as he sit sits on the couch with his unmoving and blank-staring Fish companion. However when his friend is seized by a villainous and dastardly chef bent on making a fish-soup, Afro crab must spring into action. What results, is a colourfully bright and high-impact combination of epic fighting between our Hero and the evil Chef.

This film packs a colourful and imaginative punch. A special nods must be given to the various ways AFRO CRAB calls back to other well-established children’s animation. Despite the difference in animation style, AFRO CRAB’s character design is slightly reminiscent of SpongeBob Squarepants, and the Ninja-esque fight between our Hero and the evil chef play off many popular anime for children, such as Dragon Ball Z and Kung Fu Panda. Also worth mentioning is the specific type of musical choice for the fight sequences- a distinctive heavy metal piece that re enforces the epic nature of the battle.
In the end, our afro crab is reunited with his fishy friend, but he might have to make do with a slightly altered version. AFRO CRAB is a fun, action packed way to spend a few minutes with anyone you would like to escape with. Enjoy the show!