Skip to content
HomePosts tagged 'James Marsden'
In a world of super-villains, evil schemes and global domination, someone has to take out the trash. Welcome to the world of Henchmen, third class. When a fresh-faced new recruit joins the … See full summary »

HENCHMEN, based on the short feature HENCHMEN III: SUITED by writer/director Adam Wood is now a full blown feature length Canadian/American co-production.  The film is produced by Vancouver’s (Burnaby) Bron Studios in association with CW Media Finance.  In the world of dog eat dog or animation studios eat animation studios industry it must be a tough try for Bron Studios competing with studios like Disney, Sony, Illumination and even Japan’s Ghibli Studios and Britain’s Aardvark Studios.

The film begins in the real world where a student on the way to school on a school bus fantasies while reading a comic book.  He hates it when the superheroes win (even though in the comic, they are ridiculous as girly twins) over awesome villains like Dr. Shark Hands.  As most lonely individuals do, they lean towards the dark side.  Lester (voiced by TV’s SILICON VALLEY and the film ENTANGLEMENT) dreams of becoming a super villain called The Orphan which he invents himself.  The orphan has no family, no friends, no one.  He waits to become of age to become an apprenticeship villain in Super Villain City where he hopes to become a fellow henchman.

.A fallen henchman named Hank (James Marsden) leads a team of Lester and two others, called the “Union of Evil”, who must prevent Baron Blackout (Alfred Molina) from dominating the world. The crew are assigned to the Vault of Villainy, where Lester accidentally steals the ultimate weapon.

The twist in the genre of bad against good is a good distraction but one soon realizes that good has to overcome evil as Lester eventually saves the world against Baron Blackout.

The film’s humour is funny but also silly at times.  “Any ‘baddie’ home?” and the constant rendering of the villain’s manic laughter on the soundtrack are examples.  The funniest segment is the one with the villain in a tub out to destroy the good guys with his molten radioactive cheese, his mouth always overflowing with guck.  Other sequences contain slapstick antics, but most come across as humourless in its execution.  Think JOHNNY ENGLISH STRIKES AGAIN.

The animation is not bad but not of the Pixar/Disney calibre, looking like something out of the old Tex Avery cartoons.  HENCHMEN is comic book fare which means the animators need not go all out for realism like animating water, fire and shadows.

HENCHMEN like the TOY STORY films are targeted at male kids.  The film clearly lacks female content.  For one, there is only one female in the cast – that of Jane Krakowski as Jane.  The story also contains no romantic element.

One cannot help but notice that Bron Studios and Wood with his crew of animators and artists have put in super effort and worked very hard for their animated feature HENCHMEN.  The project itself was started in 2015 and took 4 years before completion.  But unfortunately the results are mediocre. 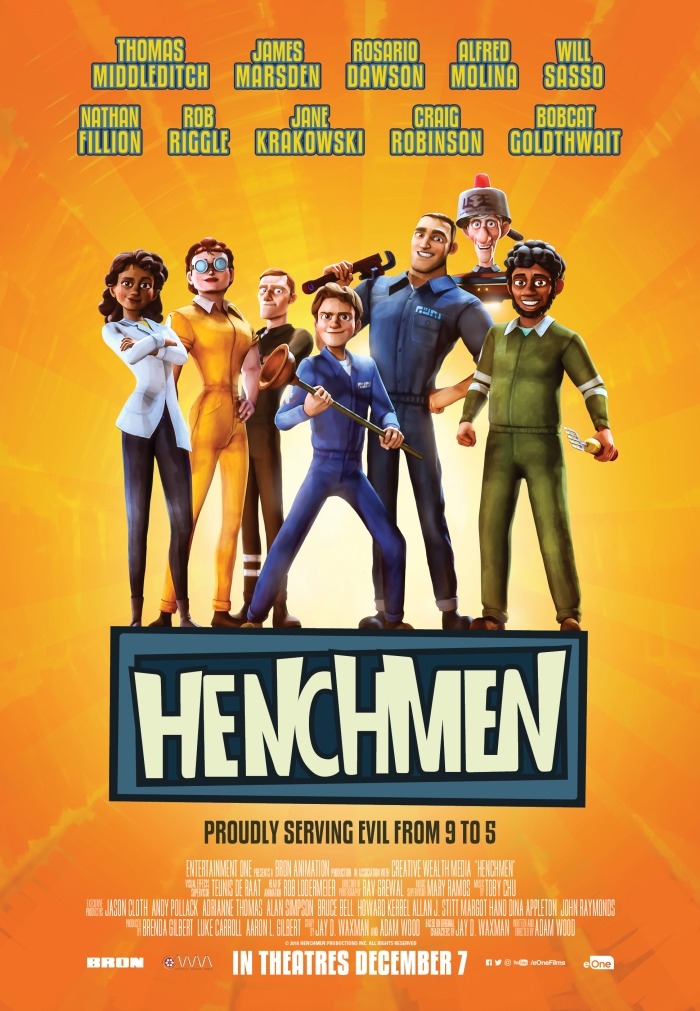 A group of journalists covering George Bush’s planned invasion of Iraq in 2003 are skeptical of the president’s claim that Saddam Hussein has “weapons of mass destruction.”

As the film title might imply, the fictionalized events of a true story is intended to shock and awe.   But the title of the film, SHOCK AND AWE (technically known as rapid dominance) is a military tactic based on the use of overwhelming power and spectacular displays of force to paralyze the enemy’s perception of the battlefield and destroy its will to fight.  This doctrine was applied by the United States in the Iraqi invasion

The film, based on a true story (that it proudly declares at the start of the film) is an account of the journalists investigating the assertions by the Bush Administration concerning Saddam Hussein’s alleged possession of weapons of mass destruction as an excuse for the 2003 invasion of Iraq.   Two determined reporters, Jonathan Landay (Woody Harrelson) and Warren Stroebel (James Marsden), their boss, John Walcott (Rob Reiner), and war correspondent, Joe Galloway (Tommy Lee Jones), lift the lid on abuse of power at its highest level and expose the truth about what led us into the longest and costliest war in American history.

Written by Joey Hartstone and directed by Rob Reiner (A FEW GOOD MEN, LBJ, THE PRINCESS BRIDE), SHOCK AND AWE is unfortunately no ALL THE PRESIDENT’S MEN.  Part of the reason appears to be the writer and director’s over eagerness to please.  This means getting the blood of the audiences riling with anger at the injustices done to both the American people and Iraq.  The dialogue is always full of one-liners and punch ones with insults frequently thrown at the guilty (Donald Rumsfeld is called ‘looney tunes’) for the pleasure of the audience.

But the script distracts with the female presence, no doubt put in to entice female audiences to see the film.  Warren’s romantic fling with neighbour, Lisa (Jessica Biel) leads nowhere as does Jonathan’s wife, Vlatka’s (Milla Jovovich) objections to the danger her husband might have got himself into.

In the words of Joe Galloway, When the government fucks up, the soldiers pay the price.  This is illustrated by the story of a black soldier put into the story.   Adam (Luke Tennie), has his spinal cord severed in an explosion just three hours after he landed in Iraq.  The incident is emphasized on the day Adam enlists to what he believes, in serving the country. His angry mother points out that he does not even know where Afghanistan and he wants to travel there to fight.  And worse still in a war that is lied about by the Bush Administration.  The film poses the question as to who is the most detestable U.S. President in history.   It would be a tough fight with George W. Bush as the frontrunner.

Director Reiner gives himself, playing Journalist Night Ridder chief, John Walcott the best role and the best lines.  “Bossman got balls!”  Warren tells Jonathan at one point in the film.  And “We don’t write for people that send other people’s kids to war!” says Walcott angrily – another best line.

Reiner’s film achieves its purpose in whistle blowing the Bush Administration and with shock and disgust rather than awe.  In being more entertaining, the film loses a little of its dramatic effectiveness though audiences should not be complaining.