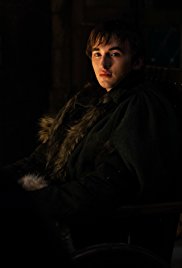 A meeting is held in King’s Landing. Problems arise in the North.

“The Dragon and the Wolf”

Anyone who didn’t see anything that happened last night coming from a mile away needs to get their eyes checked. Game of Thrones has always been a series that’s heavy-handed with its foreshadowing, but the bombs the series dropped tonight have been on our radars for a good while. That doesn’t mean that last night’s bombshell of a season finale was bad! It’s just that things are getting too predictable after seven years, and I miss the wild and unexpected turns we got in the first few seasons, like Jaime losing his hand, and Ned Stark losing his head.

Jon and Dany’s “Boat Ride and Chill” is made a lot weirder when you learn that he’s essentially boning his aunt, but this is par for the course for the Targaryens, who historically like to keep it in the family anyway. Seriously though, how creepy was Tyrion for lurking in the halls and listening in on their
hookup?

I predicted we’d have a big, heart-breaking death in this finale, and I was a little off-course considering how much Littlefinger’s been asking for it since the first season. It’s a little disappointing that Arya only slit his throat, as a full-on Ned Stark style decapitation would have been much more satisfying and tied together.

Now that the Army of the Dead have their Icy Hot dragon, how in the hell is the North going to stand against them? Even though the Night King is outnumbered two to one when it comes to fire lizards, how is Daenerys going to handle fighting and killing one of her own “children”?

Cersei is reaching Nixon-levels of paranoia and scheming, to the point where she’s finally threatened to turn her sword against her own brother. Again, what the series is implying to us through the language of cinema is that Jaime is going to rehash his Kingslayer role before the end of the final season.

This season finale has left us with a monumental cliffhanger (or should I say wall hanger, considering how Tormund barely made it out alive) and with the Night Kings marching in the direct path of Winterfell. My one hope for the final chapter of the series is that they don’t sacrifice story over time like they did with the last few episodes of this season. We’ll have to wait an entire year to find out

Arya makes her way south. Jon organizes the defense of the North. Cersei tries to even the odds. Sam adapts to his new life in Oldtown. Daenerys comes home.

Following a narrow escape from Jaqen H’ghar and the Faceless Men, Arya utilizes the talents she learned from the Many-Faced God to take out the last remaining members of the Frey clan. At Winterfell, Sansa Stark and Jon Snow butt heads over whether the King in the North should rule with a gentle heart, or with a heavy hand. In King’s Landing, Cersei is running out of options, and has to turn to the traitorous Euron Greyjoy for help. Samwell Tarley continues to train to be a Maester in the Citadel to gain information to defeat the White Walkers. Last but definitely not least, Daenerys and her dream team from Westeros are finally back in her ancestral home of Dragonstone.

This episode has set the stage for the beginning of the biggest battle in the history of this series, spanning three major contenders for the Iron Throne. It’s also left us with a lot of unanswered questions. Is the mysterious prisoner at the Citadel none other than Jorah Mormont, Daenery’s long-time admirer whose fate is currently unknown? What treasure does Euron Greyjoy intend to bring to Cersei to prove his loyalty? Will tensions between Sansa and Jon settle into place, or Petyr Baelish’s interferences again be the downfall of the King in the North? Only time will tell who will rule the Seven Kingdoms.